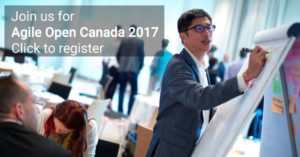 Friday night’s Agile event started with some ice breaking games followed by dinner. After dinner we officially opened the space, sitting in a circle.

Next came the opportunity to share a three-minute lightening talk. The idea was to share something interesting in lightening time; three minutes. To be honest, I wondered initially if anyone would stand up, as the room was very quiet. To my surprise one person got up. From there, many people gave lightening talks one after the other.

With the momentum of the group, I surprised myself and got up.  I believe that this demonstrates the power of We.

The whole thing reminded me of self-organizing teams. When we involve more than one person, that is, when we give teams autonomy and let them play, it is it amazing what they will come up with.

Saturday morning arrived. Everyone was brighter than the day before, recovered from travel and fully rested. 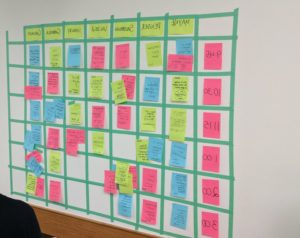 Our task was to full the day, aka the white board with topics for group discussions. Standing up and suggesting a topic area that you either would like to share, or find out more about, was the idea. There were seven stations in all and six time slots with a total of 42 potential topics.

Again I was surprised to find that people were quick to suggest topics, and once again amazed that I had offered to full three time slots. My choices were live coaching, employee engagement and team dynamics. I had the privilege of sharing the later one with another attendee. The adrenalin in the room was contagious. The spontaneity and autonomy of such an event is precisely what makes it so successful and empowering.

The sessions were exuberating, creative, innovative and totally relevant. As a participant you were free to do what you needed to in the moment, whether that be to share something, ask a question, or move to another station. The latter is referred to as the “Law of Two Feet”. It is described as, “If at any time during our time together you find yourself in any situation where you are neither contributing, use your two feet and go someplace else”.

Finally, at the end of the day

We moved back into the circle, closed the space together, and at that, the event was over.

Overall, my first experience of an Open Space experience was extremely good. Yes, I was exhausted but I was also inspired, motivated, encouraged and stimulated. I had shared information and got much back in return. I left with new ideas, many new people connections and the feeling of having taken part in something that was “leading edge”.

Thanks to everyone that organized such a terrific event, venue and location in Victoria.